This week I wanted to do a bit of fourth wall breaking and talk about The Work. There’s a ton of working filmmakers out there and there seems to be a constant stream of newcomers seeking guidance.

I’m not prolific but I’m persistent; I’ve shot a lot over something like 18 years. Over the past 2 with OWL BOT I’ve used every new gig as a way to test new theories I’ve had about “improv-filmmaking” as it were, and at this point I’m pretty happy with my solution. I’m at the point where I actually *enjoy* going out and shooting, instead of many iterations of my rig/workflow that sort of put me off taking it places, usually due to size or time of assembly. We’ll get into the gear stuff in a second.

The overarching theme here is how one applies a cinematic mindset to a documentary practicality (shout out to Zach Zamboni). My base “cinematic language” will undoubtedly differ from yours, so please just play a bit of Mad Libs when I go into gear specifics or concepts that don’t apply to you or only do so tangentially.

I think of Cinema and Documentary as two sides on a spectrum of visual media: On the left we have Cinema, which is exemplified by ultimate control in execution (perfect framing, lighting, focus, sound, etc. Completely controlled from top to bottom.) and on the right we have Documentary (or “live/event work”) exemplified by chaos and improvisation. In either situation being particularly efficient and/or fast is a big plus, so theoretically the best shooting setup would be a point on that spectrum, or somewhere new and exciting in any case.

What elements should we take from each side? Let’s break the relevant elements down in regards to practicality. A cinematic mindset always serves the story (and that’s where the real work needs to be done but you can’t teach the Art, the feeling, so on with the science.)

First, Lens choice. Theoretically a parfocal, AF/IS 8-400mm f1.2 lens that weighs 2lbs and is 7″ long would be the best documentary lens in existence as it covers every possible shooting scenario in a tight package and allows for shooting in rapidly changing lighting situations. It would become the best cinema lens if it was geared, optically perfect, didn’t breathe, had hard stops and a focus throw of 270°. And probably a standard filter size instead of my goofy 72⌀. All things considere in regards to how I shoot and the visual “language” I tend to use, the closest thing I could find that I liked was the 18-35mm Sigma f1.8. Why the 18-35 and not a longer zoom? One, the lens is as close to a small set of primes as a zoom can get in EF mount. Two, the majority of my favorite films were lensed between 15 and 40mm (thanks American Cinematographer) so I welcomed the 18-35mm as a self-imposed restriction to shoot wider, especially since I have a tendency to get really focused on small areas and given a long enough zoom I’ll come out at the end of the day loaded to the gills with close ups. Films aren’t made of close ups, there’s a lot of mediums and wides in there too. Cinematic mindset.

Second on the list, Camera choice. This is less relevant than ever now that almost every camera has 12+ stops of latitude and 4:2:2 or better color space. DSLRs still tend to suffer from jello and this kind of… indescribable videoyness to them when moving, mirrorless is becoming more promising each day, but for the so-called “cinema camera” range of things you basically can’t go wrong. For me, the answer was the C100mkII: it’s a C300 in an AVCHD, SD card-using body. It downres’ the 4K signal internally giving you the best 1080p image possible with surprising gradability at 8bit 4:2:0, and I have no use for 4K so that’s just fine with me as SD media is so cheap and ubiquitous. Forget a CF card and you’re in the middle of no where? Good luck. SD cards are practically sold in candy machines now. Worst case it’s an off-brand slow card and I can’t record 60fps Slow Mo (which the mkII does internally as well). I can get the full cinematic power out of that C300 sensor by shooting to my Odyssey 7Q+, which records “10”bit 4:2:2 to ProRes via the camera’s HDMI output for greater latitude in post. Cinematic pedigree, documentary practicality/price. More or less. That’s all rigged inside/to a Redrock Micro UltraCage with the PowerPack power distro attachment in the base which allows me to power the camera and all the accessories from one battery for surprisingly long periods of time (since the camera only pulls 8.4v like a boss). 6-8 hours on one IDX 95w powering the Camera, MicroRemote, Torque motor, Fingerwheel, 7Q+ and sometimes my phone.

Third, Audio. Having the equipment is useless if you physically can’t use it and this is one of the problems with being a single operator; audio is usually the first thing to take a hit; on-camera micing is almost not an option. In my opinion if you need audio you need a second operator to run it. If that’s impossible, I can attach a wireless receiver to the UltraCage and run that output into the 7Q+ or the camera itself and have the relevant talent wear a mic or plant one somewhere. I could also hand-hold my Sennheiser in the Rycote suspension pistol grip mount that I have and use the top handle of the cage pressed up against my head for stability (or the monopod method) but that’s starting to ask a lot. Maybe for interviews that’d be okay, especially if the monopod was used as-intended, but overall I’d have a second op running boom. In single shooter mode, the audio recorder (right now a DR60DmkII) is attached to the cage right in front of my face via the built-in 1/4″ screw so I can see/ride the levels, which was impossible with the XLR handle provided by Canon. Obviously if present the boom op could do that, but when shooting alone by having it right there it can run its output via 3.5mm to either the 7Q+ or the camera for backup/scratch audio. Worst case, the recorder can be quickly detached from the UltraCage and the Boom Op can take it off to wherever it is they need to go.

Fourth, Focus. It’s great if someone else can worry about it, but more often than not it falls to the shooter. I’ve got a MicroRemote with the little finger wheel to solve this issue, and if I AM graced with a focus puller, they can do so wirelessly with no fuss; give them the 7Q+ to use as a focus monitor, use the built-in C100 screen for framing. In more common scenarios I am The One Who Pulls so the fingerwheel is huge. As a bonus the system essentially “re-maps” your lens’ focus throw from whatever it is (90° in my case) to 270°, so if you’re rocking something like L-Series glass with a throw of 45° you’ll now have a lot more room to work. More documentary practicality there as it works with any lens. Sometimes if I get put in a spot where I need to set up quickly, fly casual, or the precision of the MicroRemote isn’t necessary (autofocus works pretty well on the mkII), I’ll leave that whole system off and replace it with just a handle in the same spot, leaving the gears on the lens, and that allows me to operate the focus and zoom with my thumb and forefinger if necessary while leaving my hand on the handle and not imparting much motion on to the camera. Which brings us to…

Stability. I love the UltraCage for multiple reasons, but chief among them is the 4 rail mounting positions. After playing with multiple variations I came to the conclusion that the best two positions, at least in regards to the Cx00 series, are the two top ones. You don’t want any stuff there at the bottom save a Mattebox (IE the Torque motor, where it can get hit when putting the camera down) and on top of that, I’ve found that having the weight of the camera “pulling” down on you instead of you holding it up results in much smoother movement more easily/consistently, and you don’t ever run into the “this camera’s gotten to heavy” shakes. To that end I have my second handle (the one thing I’ll never leave home without, the camera’s handle being the first) mounted to a rail on the upper “button side” rail, almost directly opposite and a bit forward of the camera’s handle, which results in the camera acting sort of like a very short pendulum. When the top handle is used similar to a rifle-butt in your shoulder, the results are an extremely stable, invisibly-handheld image. If I could use a tripod I’d do that first time every time, but usually when you’re out and about that’s not an option. This style of shooting (easier seen in the video) does result in your camera shooting from a lower position (further removing muscle fatigue) but as I shoot wide/low anyway this is fine for me. I prefer this method over a gimbal as, unless you’ve got a second operator or a thumb control of some kind, the gimbal tends to “make decisions for you” as to panning speed and framing that I don’t like. If something’s happening to the left I want to be able to get there immediately not spin my entire body, arms in the air like I’m rolling with the Hells Angeles, and wait for the camera to catch up to where the rest of me is pointing. Same thing with getting closer or further from your subject; the gimbal, left on auto, will make framing decisions difficult for you, or worse will flat out “make them for you” and that’s never any good. Take control of the process whenever you can. 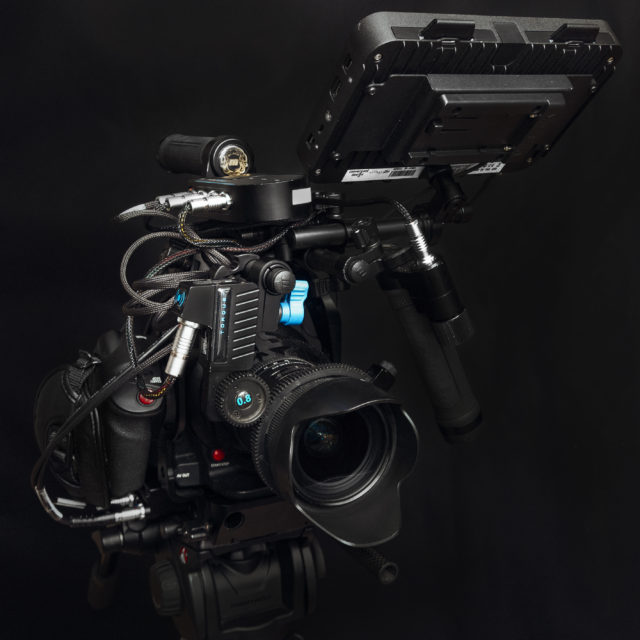 With little exception, every video from OWL BOT over the past two years has been shot with this rig in some form or another and the majority of Season One will be shot on this rig as well so for all you future audience people out there: now you know and ya don’t need to ask.

Hopefully that was informative to some degree or at least enlightening or entertaining. If you have any questions, I’m on twitter/IG as @kwmcmillan, or you can leave a note in the comment section of the video(s) or whatever method of communication you find preferable.

See ya next week